I like to explore things that interest me, so for those of you who know me personally, you know that I went to culinary school, as well as worked in the field. Granted, my focus was pastry but I still had to train on the savory side.  —And please don’t’ ask me what the best knives are. Knives are like underwear – you have to buy what feels and fits right. There is not one knife brand that trumps all others.  I’ve tried many different knives and I have to say, Global knives work best with my hands.  Global knives are Japanese and there is just something about them.  A friend of mine is a hairstylist and she prefers Japanese scissors.  Like me, she agrees there is just something about the way the Japanese make things. I had German knives in school and I hated them. —

I have been a macrobiotic vegan for almost 2 years now. Prior to that, I was a dairy eating vegetarian. Despite being devoted to macrobiotics, every now and then I get a craving for a non-macro, non-vegan meal from my past — in this case, eggplant parm. Now I know what you’re thinking, **eggplant is a vegetable** and yes, that’s true it is, but it is a nightshade vegetable and not macro which is why I avoid it (I think my Nonna just rolled over in her grave).  In my quest to satisfy the non-vegan/macro in me, I created the above subject dish. I must admit,  generally I do not like to post pictures on this blog but seeing as I posted my recipe on The Kind Life and needed a necessary picture to accompany said creation, I decided to post it here on my blog.

As for the main ingredient: Polenta, well… polenta is is something I learned to make at a very young age – it hails from my mother’s side of the family: Ancona, Italy.  Polenta is tradition accompanied by superstition (Read: Folklore).  I must admit, it was a bit of a challenge trying to veganise the tasty polenta I grew up eating (and making).  So what’s the folklore around polenta you ask? Well, it is believed to be sfortuna (bad luck) to stir polenta in a various directions. It is also sfortuna to stir it with anything other than a wooden spoon (wire whisk you say? Heaven’s no! Not in an Italian home.).  Ahhh those superstitious Italians – gotta love ‘em.

Once I nailed down a vegan version of polenta, I whipped up a quick sauce, and assembled the ingredients I always have on hand.  I’ll spare you the gory details of the process, unless you want them? So without further adieu, here is what I came up with [see picture].

Naughty Vegan Polenta & Seitan Parmigiano (the Parm is actually Daiya vegan Mozzarella *cheese*) So why didn’t I use eggplant? Again, due to it being a nightshade vegetable, I figured it would be best to avoid it.  Why the Seitan? Well, I thought it couldn’t hurt to add a little wheat protein. In the past, I have added sliced zucchini and summer squash. On other occasions, I have added Portobello mushrooms.   Basically, I work with what I always have on hand: polenta, seitan, canned (ground/peeled) tomatoes, onions, garlic, evoo, veggie stock, almond milk and Daiya Cheese.  And then I will add whatever in-season veg strikes me.  Unfortunately, my zucchini plants are not thriving so I had to opt-out of adding any garden fresh vegetables (aside from the basil which is from my garden).

It aint Eggplant Parm, but it satisfies my psychological craving for foods from my past.  Mmmmmmmmmmmmmmm. 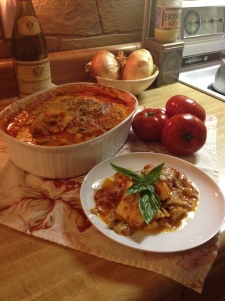 N.B.: note the cheap bottle of wine in the background? That’s my go-to cheapie when I want a glass of red, but cannot bring myself to waste a bottle of something nicer as I rarely can finish a bottle, the teetotaler that I am.

Oh and before anyone gives me a tongue lashing over the background shot of the jar of honey, know this: I owned it before I became a vegan, so in keeping with the vegan philosphy, I will use it until it’s gone and then I will not replace it.